The conflict in Syria has long ceased being a civil war, becoming instead a clash between coalitions and blocs that divide the entire Middle East.

The Iranian-led axis is the most dangerous and highly armed bloc fighting in Syria. Bashar al-Assad’s regime is not an independent actor, but rather, a component of this wider axis. In many respects, Assad is a junior member of the Iranian coalition set up to fight for him.

Russia joined the Iranian axis in 2015, acting for its own reasons as the pro-Assad coalition’s air force, helping to preserve the Syrian regime.

This coalition enabled the Assad regime to co 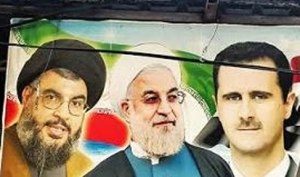 nduct mass murder and ethnic cleansing of Sunnis from Syria, while also using unconventional weapons against civilians in an effort to terrorize rebel organizations into submission.

Read more from my piece at the IPT