In 2011, I published my first book, Virtual Caliphate, which proposed that an Islamist-jihdadist state has been established on the internet. 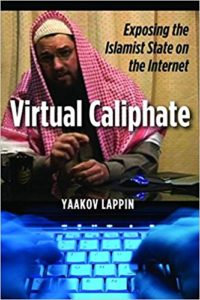 I argued that the jihadists were seeking to ‘upload’ their radical vision into the real world.

Since then, ISIS created a physical caliphate, before international coalitions destroyed it, and now, once again, the caliphate has reverted back to virtual form.

The book remains highly relevant in understanding the jihadist mindset, ideology, and ability to use the internet infect the minds of new recruits, as well as use it as a refuge in between periods of control of physical territory.

It is also useful in understanding the long-term strategic designs of the global jihadist movements.

Here’s how Middle East researcher Kyle Orton described it, in an excerpt from his review of the book:

“I have yet to read a book more prescient than Yaakov Lappin’s about events in Iraq in the last few days. Having sketched out the way Salafi-jihadists have created the ministries of a future Caliphate in cyber-format—the simple fact that ‘Al-Qaeda would not be in existence were it not for the pervasive presence of online jihadis’—Lappin finished by suggesting three options: (1) we manage to take down this virtual Empire; (2) we manage to weaken it in cyberspace; or (3) the jihadists ‘upload’ this virtual State into the real world. In the form of a fictitious news report, Lappin predicts this latter scenario as follows:

‘Despite much American success in fighting al-Qaeda, the Iraqi state propped up by American troops collapsed soon after the exit of U.S. troops … Al-Qaeda forces converged on Baghdad and Sunni areas in central Iraq, declaring the establishment of an Islamic state. … The nascent Islamist state came under immediate attack by Iraqi Shiite militias backed by Iranian Revolutionary Guard units.’Sounds like reading this morning’s news.”