At first glance, the bridal gown shop in the Palestinian city of Nablus appeared innocuous. But behind the scenes, Israeli intelligence says, the store served as a front for a major West Bank gun parts distribution center.

“Components for weapons were continuously being sold out of there,” a senior Israel Defense Forces (IDF) source told The Investigative Project on Terrorism.

The store turned out to be part of a wide network of weapons dealers who had imported their lethal goods by ordering them on the internet, the IDF stated this week.

Nine suspects, including the store owner, are in custody, and additional members of the weapons trafficking ring remain at large. “They came from all walks of life and from varied layers of Palestinian society,” the source stated.

Since mid-2016, the IDF has been engaged in an intensive, large-scale campaign to seize as many firearms circulating in the West Bank as possible to prevent them from falling into the hands of terrorists. 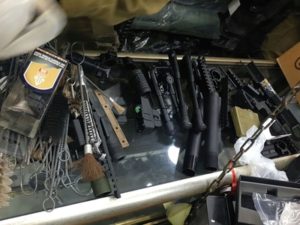